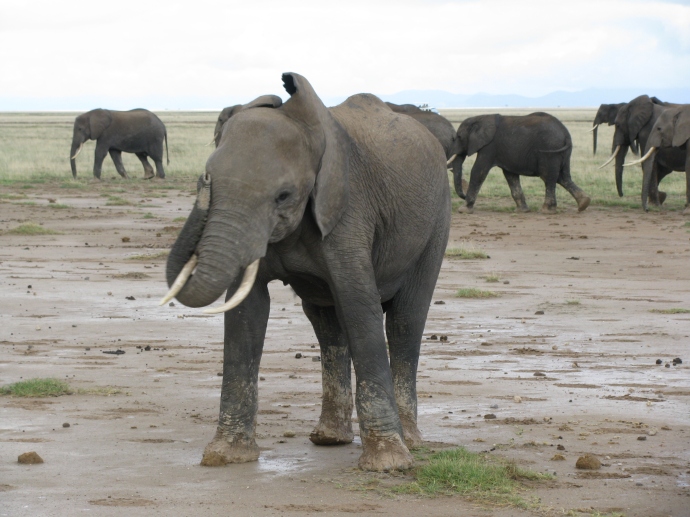 The Amboseli National Park (240 kilometers southeast from the capital city Nairobi), is the second most popular national park in Kenya after Maasai Mara. Amboseli offers some of the best opportunities to see African wildlife because the vegetation is sparse due to the long dry months. The park is famous for being the best place in Africa to get close to free-ranging elephants, the biggest terrestrial mammal of our days and one of the most intelligent and socially complex wild animals!

African elephants are listed as vulnerable by the International Union for Conservation of Nature (IUCN) while the Asian elephant is classed as endangered. One of the biggest threats to elephant populations is the ivory trade, as the animals are poached for their ivory tusks. Other threats to wild elephants include habitat destruction and conflicts with local people (however the Masai we met at park entrance were more specialized on tourism to make a living, and not on agriculture)! One of the latest and best news at end of 2016 has come from China, joining a number of other countries like United States and the European states, to ban the trade ivory, this means a lot to elephant protection!

Amboseli looked to us like an elephant paradise (well protected, with armed guards to defend animals from poachers). Being a stable source of income from safari tourism, the government has all incentive to assure survival of the wild animals within. We had the chance to see many elephants including few weeks old adorable baby elephants, and many other wild animals! The experience was fantastic and a must do in a life time! Amboseli also offers great views over Kilimanjaro mountain, being situated at the border with Tanzania, truly amazing!

The IUCN estimates a total of around 440,000 individual elephants of different sub-species for 2012. Other threats to elephants include fragmentation, as you may notice in African map below! Don’t wait more, organize your safari trip and enjoy the chance to see wild elephants in national parks, this way contributing to their protection!