Too often people are considering some things as part of normality, simply because they exist. It is the case today of the ZOOs (public zoological parks), which have been around since 1765 (first of its kind has been open in Vienna, Austria), and whose number exceeds now 10.000, most of them located in bigger cities, in US alone being visited by more than 180 Mil people annually. The origins of the ZOOs may date back even longer at the time of kings and emperors, during Roman Empire for example, when wild animals caged and later used for fighting in the arena, an outstanding number of animals being eventually killed.

Many zoos see their primary purpose as breeding endangered species in captivity and reintroducing them into the wild. Modern zoos also aim to help teach visitors the importance on animal conservation, often through letting visitors witness the animals firsthand. Some critics and the majority of animal rights activists say that zoos, no matter what their intentions are, or how noble they are, are immoral and serve as nothing but to fulfill human leisure at the expense of the animals (which is an opinion that has spread over the years). However, zoo advocates argue that their efforts make a difference in wildlife conservation and education.

I normally visit a zoo each time I visit a new country, and their set-up may vary wildly, normally the well-being of animals (mainly space dedicated) is directly proportional with well-being of that particular country inhabitants. The ZOOs in general are having various sources of financing, from selling tickets to visitors, to public funding. Animals also can be traded between zoos. It is said the animals in the ZOOs these days are babies of other captive animals, and no longer caught from the wild.

My reaction, when I see animals behind bars, as in below picture, only makes me sad. Look again please! There is nothing more unnatural and immoral than this! You would normally put people behind bars, for a determined period of time, if they did something wrong! But what these bears did wrong? They didn’t brake any law, in fact they could have not, because they only submit to the laws of nature, this has always been the case with wild animals for millions of years now!

Even today, the captive wildlife living conditions can be unimaginable. Many animals remain in barren concrete enclosures or other minimally enriched cages. Animals which naturally range over many km each day, or make seasonal migrations, are unable to perform these behaviors in zoo enclosures. For example, elephants usually travel approximately 45 km (28 mi) each day. Animals in zoos often exhibit behaviors that are abnormal in their frequency, intensity, or would not normally be part of their behavioral repertoire. These are usually indicative of stress. For example, elephants sometimes perform head-bobbing, bears sometimes pace repeatedly around the limits of their enclosure, wild cats sometimes groom themselves obsessively, and birds pluck out their own feathers. Some critics of zoos claim that the animals are always under physical and mental stress, regardless of the quality of care towards the animals. Elephants have been recorded displaying stereotypical behaviors in the form of swaying back and forth, trunk swaying or route tracing. This has been observed in 54% of individuals in UK zoos. Worst seems to be in some Chinese provinces, as below bear cages, one square meter in size, in Dalian zoo, Port Arthur, Liaoning Province, China. 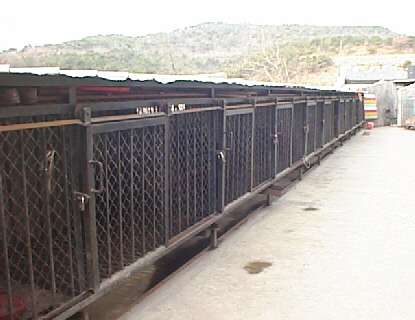 Try to judge for yourself next time when visiting a ZOO! Hopefully the visit would only educate you on the conditions of the particular wild animals in the wild, as many zoos, in more developed countries, will display such info boards. But surely I wouldn’t call a Sunday visit to the zoo as an entertainment day!

2 thoughts on “On the wildlife in the ZOOs”