Wildlife-Reporter: If we had a “TIME” magazine type of nomination, you would definitely be on the cover of the 2017 edition. Not once you made the headline in Europe, you made a remarkable comeback in Greece, France, Italy, Germany and even Belgium (article example), you have been subject of conflict between wildlife protection NGOs and government in Norway, and it is 3rd year in a row when the famous Yellowstone National Park in U.S. exceeds 4 Mil tourists, where you are the main attraction!

Mr. Wolf: Usually for us attracting human attention means troubles, that is how you would explain our nocturnal habits, shy nature and illusive appearance! Nevertheless is true and there is hope, that with support of NGOs, we may take back our place in the ecosystem in Europe! But our recent comeback is rather due to abundant wild prey (after an extended period without predators) and our survival and adaptability skills, but future is far from secured, under threat by hunting, poaching, loss of habitat (including lack of natural corridors to unite our wild populations) and human transport networks, more and more developed and wildlife un-friendly! Without human society understanding and acceptance, we may lose this survival battle and we may be bound to limited spaces within ZOOs or national parks, as element of tourism industry and not as an essential part of a healthy ecosystem!

W-R: How the nick-name “Big Bad” Wolf was attributed to you and sticked for such log time?

Mr. W: Personally I prefer the nick-name “Guardian of the forest”, as it is closer to our role in the ecosystem, being on the nature’s top of the food chain, regulating the number of herbivores, which would otherwise multiply too much and would exhaust the food resources! It is a typical natural predator-prey relationship, assuring the ecosystem balance and long-term survival of predator, prey and plants! The term “Big” is rather subjective of human imagination, we are not bigger than some dogs for example, our size is perfectly suited to environment and size of wild prey we rely on, and the term “Bad” does not even find a place in nature, where as I mentioned, we all live in a balanced dependency, this is the natural state of a healthy eco-system, there is no such thing as good or bad wild animal, each has its role in the ecosystem!

W-R: Tell us more about yourself, what people should learn?

Mr. W: Our relationship with humans goes back more than 40.000 years ago, and has not always been bad. Some early humans were benefiting from our hunting skills and were often taking our prey but also some of our ancestors found in people a source of security, and they left the wilderness to be now part of human societies, these are modern day dogs, also called “human’s best friend”! But most of us continued our way in the wilderness, as we did for millions of years. We are not so different from people in certain regards, we have a complex family structure around an Alpha pair, we communicate between each-other, we defend a territory, we compete with our kind as well as other predators for food, to be able to raise our families, which, same as with humans, is our top priority, human parents can understand this!

W-R: How does a typical day in your life look like?

Mr. W: Depends really on the season! In winter we live in an extended pack format, we are more sociable and very mobile, we could easily cover 40 to 60 km in one night, as we are not bound to one place since our babies have grown and they can keep up with us. Most activity is focused on hunting, where tasks are split between team members. In a pack, as well as with help of deeper snow, it should be easier for us to make a successful hunt, but not all wild animals we encounter are being turned into food, we rely on our senses to detect certain weaknesses in our prey, mainly old age and possible diseases. With this, we may have the chance to catch our food once per week, that is a 1 in 10 chance of success! In summer, in a light pack format, we are bound to our nursery place, where we have to return after every meal we find, to feed our youngsters as well the dedicated nurse wolf assigned to take care of the cubs! And regardless of season, we are also busy protecting from other predators, or marking the boundaries of our territory to keep other packs at distance!

W-R: Did you eat the Red Riding Hood or not?

Mr. W: Continuously hunted and persecuted by people during centuries, we learned to associate the smell of people with danger, from early age, even if we never saw a human before. Therefore we run away at first human scent, normally never get close to humans. In rare case, when a wolf catches rabies, it may than get closer and bite people, or anything that comes across! Otherwise, humans have nothing to fear, wolves do not bite nor eat humans! On the contrary, it is our kind being hunted, trapped, poisoned, cursed, blamed and driven to extinction by humans! However folklore has its role in influencing humans, what is interesting is that at an early age children rather like wolves and other wild animals and nature, it is later on that their opinion changes in the opposite direction, and here people need to work more on education and keeping touch with nature in order to avoid this derail.

W-R: What about the ubiquitous accusations from part of farmers and killing of their livestock?

Mr. W: These accusations are surely over-exaggerated! Studies proved that a cow is statistically more likely to be hit by thunder, ran by a car or die from diseases, rather than being killed by a wolf. Sheep can also be easily protected by guarding dogs, very old and efficient method! Exceptions happen, and this is also human’s fault, when live-stock is left to graze in wild areas without guarding dogs, and wild prey is exceptionally rare, and when young wolves, potentially orphaned by hunters, may have to attack live-stock or face starvation!

Mr. W: Our biggest existential threat today is human misunderstanding! If people would understand our role in the ecosystem, and how the ecosystem and planet really work, we would all be able to live side by side, in harmony, as we did for millions of years! I wish therefore more understanding, peace, more wisdom and a healthy ecosystem for all to share and enjoy! And to all people fans, wishing you an excellent holiday time, together with dear ones, Merry Christmas and a Happy 2018 Year, full of good news from wilderness! 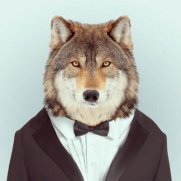 10 thoughts on “Exclusive interview with the “Big Bad” Wolf”