TRAFFIC, the Wildlife Trade Monitoring Network, is the leading non-governmental organization working globally on the trade of wild animals and plants in the context of both biodiversity and sustainable development. As per their definition, “Wildlife trade is any sale or exchange of wild animal and plant resources by people. This can involve live animals and plants or a diverse range of products needed or prized by humans—including skins, medicinal ingredients, tourist curios, timber, fish and other food products”.

As per their data as well as other official sources ,illegal wildlife trade is widespread and constitutes one of the major illegal economic activities, comparable to the traffic of drugs and weapons. In the early 1990s, crimes against wildlife were rampant in certain parts of the United States, and poaching may have equaled or exceeded the number of animals hunted legally (report). In other parts of the world, things get even worse, with entire trans-national supply chains and organized crime behind, from the field poachers to white collar intermediaries and further to consumers, trading the rare species (dead or alive) from wilderness on various continents to insatiable consumer markets in Asia, mainly China and Vietnam. The best known are the notorious ivory trade (with long history of various consumer countries introducing import-bans, sometimes removing them – as in case of relaxation of legislation in debate during Trump administration, or producer countries as Kenya/Tanzania burning the confiscated stocks) and rhino-horns trade, also mentioned in Misha Glenny‘s Mc Mafia book, notes @Facts.

In the zone I am more familiar with, Eastern Europe, I could say, with minimum risk of generalizing, that every person with a legal license for hunting has been at least once in his lifetime a poacher. And not only persons having a gun, but also the ones setting snares in the forest, that trap wildlife for consumption, their own, their families and friends, and even for small scale skin trade on local markets (unless a more influencing middlemen is involved, that can have cross-border connections to reach foreign customers). The profile of a such an opportunistic poacher in the region is of a man (18-70 years old), poor by local economic standards, with minimum education and no stable income, living at periphery of a forest (striking similarity with Frederic Rouge’s painting, dating couple of hundreds years ago, proving some people and practices may not have changed much meanwhile). 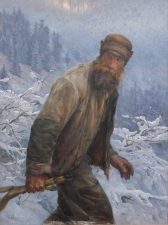 The Poacher by Frédéric Rouge

Legal wildlife trade is regulated by the United Nations’ Convention on International Trade in Endangered Species of Wild Fauna and Flora (CITES), which currently has 183 member countries called Parties, and protects species listed under Appendix I threatened with extinction, with commercial trade in wild-caught specimens, or products derived from them, being prohibited. This rule applies to all species threatened with extinction, except in exceptional circumstances (and also explains what we have learned at Sigean, that they no longer host elephants in the park because they cannot import anymore).

In the 1990s the annual trade of legal animal products was $160 billion annually. In 2009 the estimated value almost doubled to $300 billion. This is a huge industry by any standard, and painful to see the scale of it and the trend evolution (even knowing that any ban, as in case of drugs, alcohol and cigarettes would just boost the black market)!

The way I see it, legal or illegal, there is no morality, or justification for exploiting other fellow species with which we are share the planet, to obtain material profit (remember less than 200 years ago, during mercantile capitalism times, even trade with human beings and slavery were considered acceptable and even encouraged for economic benefit of land lords and aristocrats, being practiced for over 250 years). Various parties are sharing the blame, with consumers at top. But once again, the main blame I assign to the current unsustainable economic system, which from birth encourages consumption, competition for resources, accumulation of wealth and prestige, and inequality among people. This, coupled with human nature, craving to have more and to sit above its peers, is a formula for disaster. Ignore this affirmation as you wish, especially the ones happy with current status quo, but in the end it will impact you, one way or the other, if we don’t start paying attention to environment, to its wildlife, and to our own consumption habits! Empathy, responsibility, accountability, conscience and compassion (for all around us, not only for yourself and peers) should define all society, not ease and oneself material interest, social status and power!

Wildlife parts, confiscated from smugglers or tourists, at display in Warsaw International Airport.

3 thoughts on “Trade of Wildlife”