Microbes – bacteria, moulds, viruses, protozoa, and algae – are present in every environment, living in soil, water and air. Some microbes cause disease but most are vital to life on Earth. Among other things, they break down organic matter so that it can be recycled back into the ecosystem, hence the famous saying: “It is the microbes that will have the last word“, by Louis Pasteur.

Trillions of microbes also live on and in the human body. The most common of these are beneficial bacteria, which aid the digestion of food, produce vitamins, and help immune system to find and attack more harmful microbes. Scientists did not understand microbes until they could see them. The first observations began in the 17th century, using the recently invented microscope.

Viruses, more in spotlight at present due to famous Covid19 pandemic are by far the most abundant biological entities on Earth and they outnumber all the others put together. They infect all types of cellular life including animals, plants, bacteria and fungi. Different types of viruses can infect only a limited range of hosts and many are species-specific. Some, such as smallpox virus for example, can infect only one species – in this case humans, and are said to have a narrow host range. Other viruses, such as rabies virus, can infect different species of mammals and are said to have a broad range. The viruses that infect plants are harmless to animals, and most viruses that infect other animals are harmless to humans. But as we destroy forests and consume wild animals (especially in China and Africa), it is expected for humans to get more exposed to viruses, which otherwise would have lived in a state of balance within their ecosystem.

As per Wikipedia, a virus is a submicroscopic infectious agent that replicates only inside the living cells of an organism. Viruses are considered by some biologists to be a life form, because they carry genetic material, reproduce, and evolve through natural selection, although they lack key characteristics (such as cell structure) that are generally considered necessary to count as life. Because they posses some but not all such qualities, viruses have been described as “organisms at the edge of life”, and as replicators.

Viruses are an important natural means of transferring genes between different species, which increases genetic diversity and drives evolution. It is thought that viruses played a central role in early evolution, before the diversification of the last universal common ancestor into bacteria, archaea and eukaryotes. Viruses are still one of the largest reservoirs of unexplored genetic diversity on Earth.

What we all experience today with the coronavirus must be also a lesson of humbleness, showing how vulnerable we are as a species, especially in an ever more global world, in front of an invisible virus, how quickly situation can turn pandemic, how many lives can cost and how even more vulnerable, artificial and unreliable is the economic system we depend on. Time will tell, how much we have learned from this lesson, or we miss another good opportunity to change for better! 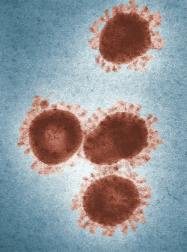